Ahmed Abdul-Fattah al-Saada, the father of Osama bin Laden`s youngest wife, shows an official document from Yemen`s President Ali Abdullah Saleh as he talks during an interview with Reuters in Sanaa May 14, 2011. The Yemeni father of Osama bin Laden`s youngest wife, wounded in a U.S. raid that killed the al Qaeda leader, said he initially rebuffed a matchmaker`s proposal that his daughter marry bin Laden, before blessing their union. Saada was presented with the document from Saleh as he had been arrested repeatedly since 2001 due to his daughter`s marriage to bin Laden. The document states that no security officials or the police can arrest him on grounds of his daughter`s connection to the al Qaeda leader. Picture taken May 14, 2011

Report by Ahmad al-Masri from London: “Ahmad al-Sadah, Father of Usamah Bin-Ladin`s Wife To Al-Quds al-Arabi: I Am Proud Of My Daughter`s Courage; I Want Her And Her Sons To Return To Yemen; Yemeni Ambassador To Islamabad: I Did Not Attend CIA`s Interrogation Of Amal al-Sadah”

Ahmad Abd-al-Fattah Abd-al-Jabbar al-Sadah, father of Amal al-Sadah, wife of shaykh Usamah Bin-Ladin, who was wounded as US commandoes stormed Al-Qa`ida organization leader`s compound in Abbottabad, told Al-Quds al-Arabi that the Pakistani Embassy in Sanaa had promised him to provide enough information on the health condition of his daughter and her children. He added that the Pakistani Embassy had absolutely not made good on its promise.

Zakariya al-Sadah, brother of Amal, said that he contacted the Pakistani ambassador in Sanaa personally and asked him for information about his sister. He added that the ambassador promised to contact him and tell him any information he would get, but had not yet contacted him. In a telephone call to Al-Quds al-Arabi, Zakariya, who is a third year student at the Journalism College at Sanaa University, and who works for Al-Manar newspaper, said that he also contacted the Yemeni Foreign Ministry and the Yemeni ambassador to Islamabad to get information about his sister. However, he said: “They have been stalling and trying every means to mislead us. They have no credibility as they are forcefully hiding women and children. This is tantamount to an act of terror that deserves to be denounced by any conscientious human being.” He said he was ready to travel to Pakistan any time to reassure himself about the health of his sister and her children, particularly after reports that she was wounded in the attack on the compound.

Abd-al-Fattah al-Sadah, father of Amal al-Sadah, denied that he had seen his daughter since she got married to shaykh Usamah Bin-Ladin early in 2001. He said he did not know if she gave birth to children other than the female child Safiyyah. He said he had not called her since her marriage, and added: “I want to see my daughter and her children and reassure myself about their wellbeing.”

Asked if he prefers his daughter to return to Yemen or to the family of her husband in the Kingdom of Saudi Arabia, Ahmad al-Sadah said: “I want to reassure myself about my daughter, but it is up to her to decide. If she prefers to stay with her children with us, she is most welcome. If she prefers to go to the family of her husband in Saudi Arabia, she is welcome to do as she pleases.”

Ahmad al-Sadah is married to two wives other than Amal`s mother, whom he divorced. He has 11 boys and six daughters from his three marriages. He said he tried to persuade Amal`s mother to return to him, but she rejected all his attempts. He said he would not lose hope and would try again to get her back.

Ahmad al-Sadah comes from the Yemeni region of Ibb, but currently lives in Sanaa since retiring after working in the Al-Sayyani District. He is not employed. He expressed his pride in his courageous Yemeni daughter who defended herself and her husband during the US raid, and almost scarified her life to defend her husband and children. He said he was not surprised at her conduct or, for that mater, at the conduct of any Yemeni woman.

Ahmad al-Sadah said that he would not only welcome his daughter and her children to live with him, if she so desires to return to Yemen, but also both wives of Usamah Bin-Ladin and all their children. These are our noble Arab and Islamic traditions,” he said.

Ahmad al-Sadah admitted that he was harassed numerous times by Yemeni government agencies in the wake of the 9 September 2001 events because shyakh Bin-Ladin`s was married to his daughter. He said: “I was detained and was only released after numerous appeals by tribal chieftains and public figures to President Ali Abdallah salih, who eventually responded to their appeals.”

Ahmad al-Sadah stressed that the detention of his daughter and her children is “an abominable act that is not justified by any heavenly faith; she is innocent and lives under hard circumstances. Suffice her the shock of the assassination of her husband in front of her eyes. We wish she and her children, along with all wives and children of her husband, could return to live with us. After all, Usamah Bin-Ladin`s other wives and children are Arabs and Muslims, are innocent, and should be treated humanely.”

Shaykh Usamah Bin-Ladin married Amal al-Sadah early in 1999 before the 9/11 events when she was 17 years of age, and became his fifth and youngest wife.

Ahmad al-Sadah said that when shaykh Usamah Bin-Ladin asked for his daughter`s hand through a mediator, he told her of the circumstances surrounding Al-Qa`ida leader and that he was on hot pursuit by the Americans, leaving to her the choice to accept or refuse. He said she agreed to marry shaykh Bin-Ladin him without hesitation, saying: “This was her fate and the will of God almighty, and that she was satisfied with God`s will.

Sources close to Ahmad al-Sadah`s family told Al-Sharq al-Awsat that Amal al-Sadah`s dowry was $5,000, and the money was paid by the mediator. They said that two wedding parties were thrown for her before her travel toAfghanistan. They noted that Shaykh Bin-Ladin later gave her the option to stay with him in Afghanistan or return to Yemen, but she preferred to stay with him and die as a martyr.

In a telephone call to Al-Sharq al-Awsat, the Yemeni Ambassador to Islamabad, Abduh Ali Abd-al-Rahman, said: “We have not been officially notified by the Pakistani authorities that Amal al-Sadah is detained. We learned this from the media outlets. We contacted the Pakistani authorities and called on them to hand over our national, Amal al-Sadah, to return her to her country, but we have not yet received any response.”

Asked by Al-Sharq al-Awsat whether he or any staff member of the Yemeni Embassy attended the interrogation of Amal al-Sadah, which was conducted by the CIA in the presence of Pakistani intelligence service, the Yemeni ambassador said: “According to Pakistani laws, we were supposed to attend such interrogations, but, as I have said, we have not received any response to our queries from the Pakistani Foreign Ministry. We are in touch with the family of our national Amal al-Sadah and the family is in contact with the Yemeni Embassy, but the Pakistani authorities have not, so far, cooperated with us, to our indignation.”

EXCLUSIVE-Father of bin Laden`s wife rebuffed union at first
By Mohammed Ghobari
May 15, 2011 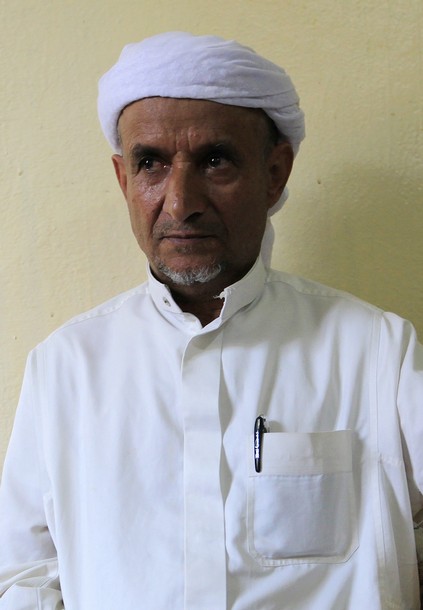 SANAA, May 15 (Reuters) – The Yemeni father of Osama bin Laden`s youngest wife, wounded in a U.S. raid that killed the al Qaeda leader, said he initially rebuffed a matchmaker`s proposal that his daughter marry bin Laden, before blessing their union.

Ahmed Abdul-Fattah al-Saada said they were married in 1999, well before the Sept. 11, 2001 attacks on the United States, and that all he knew about bin Laden`s politics then was that he had backed insurgents fighting Soviet forces in Afghanistan.

Saada told Reuters it took several requests before he allowed his daughter Amal, one of 17 children, to travel to Afghanistan to marry bin Laden when she was 18 years old and he was in his early 40s

“My daughter was Osama bin Laden`s wife, nothing more, and she had no relation to the al Qaeda organisation. I am confident of her innocence,” he told Reuters in an interview in his modest one-storey home in the Yemeni capital Sanaa, adding that he would like to see her returned home from Pakistan.

“We are not in favour of bin Laden`s actions and the al Qaeda organisation. We believe in coexistence between people.”

Yemen, bin Laden`s ancestral homeland, is home to an active regional arm of al Qaeda that claimed responsibility for a foiled 2009 attempt to blow up a U.S.-bound plane. It was also blamed for bombs found in cargo en route to theU.S. in 2010.

Militants bombed the U.S. Navy warship Cole in the port of Aden in 2000. Two years later an al Qaeda attack damaged the French supertanker Limburg in theGulf of Aden.

Many of those who trained in al Qaeda`s camps in Afghanistan before the Sept. 11 attacks came from Yemen.

Saada said his daughter came into contact with bin Laden`s circle as a teenager attending an Islamic religious school where she was a student of the wife of Rashad Mohammed Saeed, whom he described as an aide to the militant leader.

He said he did not receive any money from Saudi-born bin Laden for the marriage.

“Rashad asked his wife to nominate a girl to marry bin Laden because he wanted a Yemeni wife. The teacher selected my daughter,” he said, adding that the man initially told him a Pakistani businessman wanted his daughter`s hand.

“I refused at first and insisted on knowing who this person was. After that they said that he was Osama bin Laden, from a wealthy family in Saudi Arabia,” he added.

He later relented because his daughter backed the idea: “She stuck to her view and told me she wanted to marry him, and I have not imposed a husband on any of my daughters. So I agreed.”

Saada said he had never met bin Laden in person and that his daughter travelled to Afghanistan for the wedding ceremony accompanied by her sister and brother-in-law, who had fought there, and her teacher. He said her travel companions stayed on for a month to make sure she was settling in well. After the Sept. 11 attacks, he lost all contact with his daughter, now 29, last speaking to her after the birth of her first child, a girl named Safia.

“We did not know until now where she was or how she was living or how many children she had,” he said. “We had been planning for her mother and one of her brothers to visit her but the September events thwarted this plan.”

Amal was reported to have earlier told Pakistani interrogators the family had lived for five years in the compound where bin Laden was killed by U.S. Special Forces.

“We are not worried about the Americans interrogating her because she is just the wife of Osama bin Laden, and she and her children have no link to what he did. But I strongly reject handing to the American side this Yemeni citizen. She needs to return to her country.”

Saada said his family had met the Yemeni foreign minister, who promised to help try to get his daughter and her children repatriated. Pakistan has said it will repatriate bin Laden`s widows and their children. “When I go to the mosque at prayer time, I call on God to return her to us,” Saada said. “I hope they are given the chance to return to Yemen to begin a new life far from violence and being pursued.”