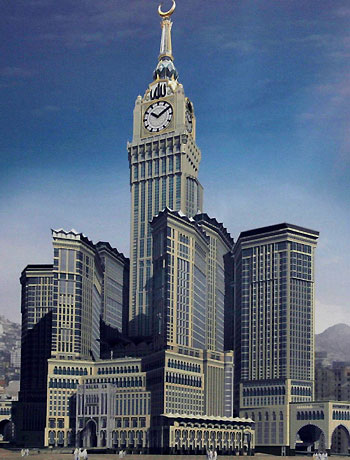 The 213-room hotel is Raffles` second property in the Middle East, following the opening of its Dubai property in 2007 and signals the chain`s determination to expand outside of its established Asian base — a property in Paris is set to open later this year.

Looking over the Grand Mosque and the Kaaba, the Raffles Makkah Palace offers round-the-clock butler service for guests, along with a “coffee sommelier,” a four-storey mall in the basement, and four restaurants.

However, Raffles` hotel will soon be overshadowed — literally — by the Makkah Clock Royal Tower hotel from Fairmont right next door.

Situated in a 76-storey building and set to be opened within months, the 858-room hotel has been built inside the new Makkah Clock Tower, the centerpiece of the enormous Abraj Al Bait Complex which will eventually house the Raffles, the Fairmont and a Swissotel.

The clock tower features four faces that are 43 meters in diameter, visible from 17 kilometers away, to announce daily prayers to the Muslim world and establish “Makkah Time” as an alternative to Greenwich Mean Time (GMT) as the global time standard.

According to hotel analysts STR Global, Saudi Arabia was the second fastest-growing market in the Middle East after the United Arab Emirates in June, with 16,680 rooms in the pipeline, compared to 54,814 in the UAE.

Last week, Hilton announced that it had signed a deal to open two properties in Riyadh in 2012, describing the country as its “number one development market in the Middle East.” 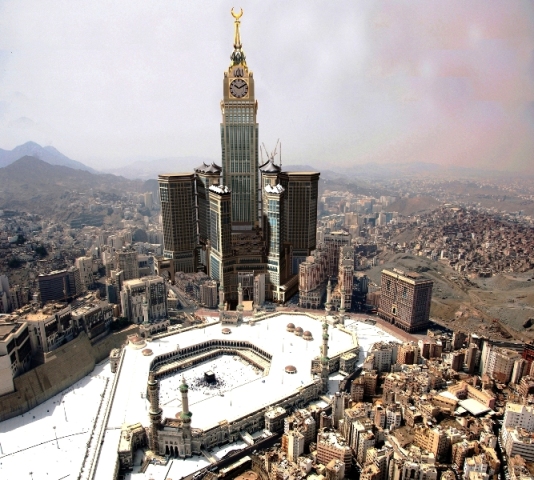 DUBAI — As millions of Muslims embark on the hajj pilgrimage to Mecca tomorrow, plans for a multibillion-dollar redevelopment of Islam`s holiest site are stirring outrage in Saudi Arabia.

The plans – intended to be kept secret but leaked to the Architects` Journal last week – would see a group of Western “starchitects,” including Sir Norman Foster of London-based Foster & Partners, redesign Mecca`s central Haram mosque to accommodate up to three million pilgrims at a time. The plans reportedly have the blessing of Saudi King Abdullah bin Abdul Aziz.

However, the king`s courting of Western, mainly non-Muslim experts has enraged some Saudis.

“You cannot redesign such a place without a deep feeling and knowledge of it,” said Sami Angawi, a renowned Saudi architect who has devoted much of his life to preserving Islamic architecture in Mecca and Medina.

Mr. Angawi, 59, said he was “surprised and upset” to learn that Islam`s most sensitive locations would be redesigned by “outsiders.”

Non-Muslims, he is quick to point out, are forbidden from even entering Mecca, which presents logistical challenges to most of the King`s hand-picked team of experts, regardless of their prestige.

“When you design a mosque, you need to be able to experience it. I feel very confused about such a decision,” said Mr. Angawi, whose family traces its roots to the Prophet Mohammed.

His comments hint at a wider discontent in Saudi Arabia over how the construction project is being managed.

Even before plans to redevelop the Haram mosque were revealed, controversy simmered over renovations already under way in Mecca that have seen high-rise hotels and pricey apartment blocks replace sacred buildings.

In its current incarnation, Mecca features everything from Starbucks coffee shops to H&M clothing stores, part of a billion-dollar effort by the kingdom to cater to – and profit from – millions of Muslim pilgrims who are obliged by their religion to visit the holy city at least once in their lifetimes.

A recent report by the Saudi British Bank estimates $30-billion (U.S.) will be invested in construction and infrastructure over the next four years within a two-kilometre radius of the Grand Mosque, with 18 future projects in the pipeline and more than 100 new towers planned.

The building boom has seen the house of Khadija, Mohammed`s first wife, where Muslims believe he received some of the first revelations of the Koran, lost under the construction, as well as the Dar al-Arqam, the first Islamic school, where Mohammed taught.

Conservationists have complained about the commercialization of the wider city, but the redesign of the Haram mosque itself – ostensibly meant to address deadly overcrowding, which killed more than 300 people two years ago during the ritual known as stoning of the devil – is proving to be a tipping point.

Proposals have been divided into two tracks. Foster & Partners is one of 10 firms working on the northern expansion of the mosque. Zaha Hadid, a London-based architect of Iraqi origin, is redesigning the mosque itself.

Public dissent in the conservative kingdom is rare, with few people willing to openly challenge the decisions of King Abdullah and his advisers.

However, Mr. Angawi, who studied architecture at the University of Texas and received a doctorate from London`s School of Oriental and African Studies, is known as an outspoken critic and says others share his views.

“Some of them are from very high levels, but they cannot talk,” he said.

In the past, Western companies have redeveloped parts of Mecca, but not without facing unusual challenges.

Ten years ago, Los Angeles company United Automation Inc. won a contract to rewire the sound system of the mosque. Barred from entering Mecca itself, American engineers completed most of the project in a California warehouse, where the system had to be assembled and tested. A team of Muslim mosque technicians then had to be flown to Los Angeles to learn how to install and run the system.

Mr. Angawi said times have changed: “There is a lot of expertise right here in Saudi Arabia. It is not 50 years ago. We have the knowledge to do this ourselves.”